Debugging a New Feature in a Vercel TypeScript GitHub Repo

There's an old programming joke that goes something like

There are only two hard problems in computer science: cache invalidation, naming things, and off-by-one errors.

I think we should add a third (fourth?) problem to that list: sorting things.

There are lots of different ways to sort things in computer science. C.S. students learn about time and space complexity of these sorting algorithms, YouTubers make cool visualisations of them, and occasionally, a guy named Tim will invent a new one.

But there's one aspect of sorting algorithms that -- for me, at least -- seems completely impossible: remembering in which direction things are sorted.

If you say to a group of people: "okay, everyone, stand in a single-file line, ordered by height", the next question you might ask is "okay, but in which direction?" Who should stand at the front of the line? The shortest person or the tallest person?

In programming, we define comparison functions, which describe how to order whatever objects we're interested in.

...we would expect array to be sorted alphabetically, with apple as the first (0th) element of the sorted array

Note that <array>.sort() in JavaScript sorts the array "in place", so that the original, unsorted array no longer exists afterward. In some languages, and for some sorting algorithms, arrays are not sorted in place, and a new array will be returned. This new array should be assigned to a new variable.

But often we will be working with objects more complex than strings, and we will need to define custom comparison functions. These are functions which take two elements of type T and return a number, and are used to sort arrays of type T:

Without reading the docs, will the console.log()s above give the same result as the earlier ones? How about something a bit simpler -- sorting an array of numbers:

I understand the utility of sorting algorithms, and I understand the need for a ternary (greater than, less than, or equal) return value, and hence number as the return type instead of boolean, but comparison functions are just one of those things that I've always had to test every time. Sometimes in development, and sometimes in production.

With what we learned above, you should now be able to see what went wrong with my initial code. The problem was here

git log returns commits sorted by date, such that newer commits come first and later commits come afterward. So dates[0], above, is the newest commit returned from git log, and each blog post was being given a "publication" date of the most recent commit in which that post was modified.

When were these blog posts most recently modified? Well, all of them were modified in that same commit, because the point of the commit was to remove the date parameter from the front matter. Essentially, I was mixing up the lastUpdated date and the published date. One of these is the first element in the list (dates[0]) and one of them is the last element in the list (dates[dates.length-1]).

So like I said, there are four hard problems in computer science.

On To The Next One

With that fixed, we're off to the races, right? 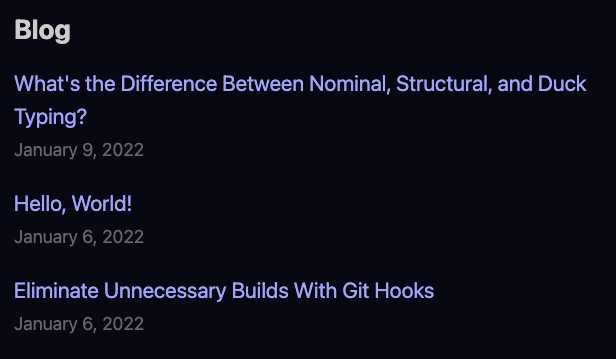 Those two posts were both committed on January 2 (Hello, World! and Git Hooks), not on January 6. So why did they both have the wrong date?

Find out in the thrilling final installation of this debugging mystery!